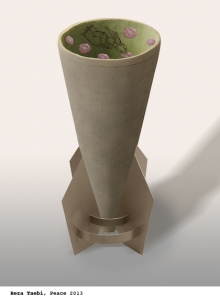 Is there such a thing as a justified war?

“A bomb, sheathed in condoms, explodes in a childlike paradise.”(1)

From Picasso to Chagall, the struggle for peace has been one that is constantly and necessarily represented in the arts; peace as something worth striving for, whose presence we must keenly endeavour to decipher in the everyday, that we can only hope to imagine as a projected fiction.

From April to May 9th a medium sized gallery near Bond street strained under a vast show of works old and new, by contemporary Iranian artists (and one Iraqi artist) brought together to continue the enduring discourse surrounding perceptions of peace. And to sell of course. Included in the show were around 55 Iranian artists from Iran and abroad (an estimate as the place was so busy at the opening, some of the works were not yet hung).

Azadeh Ghotbi “Give PEACE a Chance to Soar” 2013

Taking part were the seminal and renowned sculptor Parviz Tanavoli (b.1937), the Saatchi-endorsed photographer Shadi Ghadirian (b.1973) and arguably Iran’s biggest film director Abbas Kiarostami (b.1940), with one of his cinematic contemplations as still image photography. Besides these were Farsad Labbauf (b.1965), whose works are on display at the Saatchi Gallery, and Koorosh Shishegaran (1945), a currently very popular artist even beyond the Middle Eastern ‘scene’ whose three dimensional works demand more than a double take, something sadly that cannot be said of much of the aspirational work we see too often the world over. Perhaps untrained, perhaps unconsidered, there are works coming from “emerging” regions, and films also, that are given a tacit allowance, merely because they are made in the region it is as if onlookers are not expected to see them for what they often are. 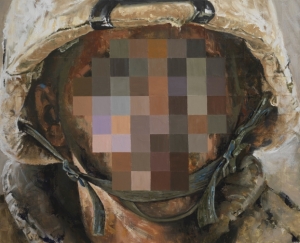 Thus it was a show involving several very established older artists, placed beside younger work that was at times painfully literal. In any case to see a fine black and white Kiarostami glowing  in sparse simplicity, nearby a gluey-looking work composed of an explosion of brightly coloured condoms was worth a trip in itself. One of the show’s curators explained to us how she had been to Iran looking for new work on this theme of peace.

But perhaps it was a kind of cultural tourism of our own that we were enjoying at the opening, as it was clearly a chance to see a certain kind of Iranian not often out on the art scene. The opening was the most packed we’ve seen and demonstrated a hunger for Iranian art that is driving the market, a hunger that is either a cultural curiosity, a respect for an historically rich region, communiques by an underrepresented peoples or as a need to connect with a country that is for all intents and purposes, almost isolated from the rest of the world. In this episode we speak with Bahman Akhavan, Ghotbi Azadeh, Shadi Mahsa, co-curator Leila Varasteh (who had produced the show with Vida Zaim) and her sister a contributing artist Negar Varasteh.

‘Peace from the bottom of my art’ was at The Opera Gallery, London.