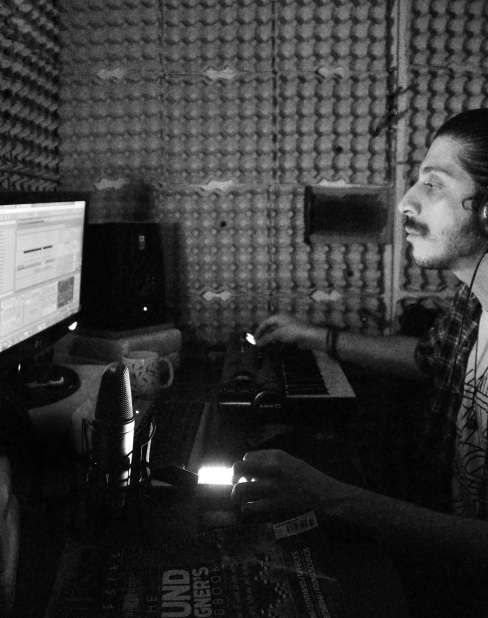 “For me improvisation is the most glorious element in jazz music”

As part of our #IranUKSonics residency running until Dec 20th, we feature a series of interviews with each of the five selected participants.

Nemo Ghasemi Tafreshi, also known as Bluesy Guy, is an award-winning blues guitarist, electronic musician and song writer from Iran. Originally from Tehran with a background in film scoring and sound design, Ghasemi experiments with digital files and VST software. His influences include Radiohead, Autechre and Jon Hopkins and for a while he was lead singer and a founding member of Iranian band The Gap before they split up.

My thoughts on music:

As a young child, I used to sing melodies and play well-known theme tunes with any instruments I could find. The only instrument I owned then was a harmonica. I used to hear my dad listening to his favourite classical music (Dmitri Shostakovich, Johannes Brahms,…) and also to Iranian traditional music, but I never became interested in the traditional music.
In those days we used to buy a cassette or a vinyl and enjoy it for a month or two, and after that you could keep them, as well all the artworks on your shelf, and because of that the act of listening to the music had it’s own culture and value. Now though it’s completely different, the values are different. Mp3s today are more available, faster to get hold of and they don’t take up any physical space, but they are not collectable, and have no nostalgic value.
For me improvisation is the most glorious element in jazz music; it’s got a flowing and mischievous movement of notes, a story, a main theme and so much feelings inside it.
As far as the experience of listening live as opposed to listening to recorded music goes, each instrument has it’s own wave form and harmonics which are all familiar to us. With digitally created sounds you can create a completely new sound or invent an instrument and add your feelings, and bring it to life or even layer it along with traditional instruments, and that is so exciting.
My ultimate goal in music would be to give birth to a new form of music which involves aesthetics as well as completely new born elements and ideas, and that is only achievable through experimentation.
Classical music, though is a precious treasury, which any one can enjoy regardless of whether anyone considers it “out of date or not’, and of course in Iran today so many young people listen to classical music as well as modern music. They tend to prefer works from the period of Russian Romanticsim or by Bach, Chopin, and Brahms generally.
As far as modern music being an industry goes, I think commercial music and music for music’s sake  – what I call ‘pure’ music – should be separated, but there should be a way for the musicians who are doing it for music’s sake, to be funded.
My favourite city sounds from Tehran, are the early street sweeper in the streets, I really love that sound, while I can’t stand the noise of motorcycles, that irritates me the most.
Finally, looking to the future, I would like to be a professional composer and sound designer for film with my own solo project on the side, as an individual artist.
Catch Nemo live in London on sax and electric guitar at the Queen Elizabeth Hall, Southbank Centre at 6pm, Friday 14th December 2013.