The performance of Peace Cylinder

The Peace Cylinder Project uses a ceramic replica of the original Cyrus cylinder with the declaration engraved on the surface and a wooden roller covered by a polymer plate to hold the last chapter of the Book of Esther in Hebrew. These are used together in a ‘performance’ to create prints on clay and paper. The rolling of these devices underscores the importance of the message that each text bears, and the similarity of each act of printing is intended to reflect the ‘common themes’ and the universal significance that each text tells in its own way. But what do the texts actually say?

The cylinder of course lays out rights for 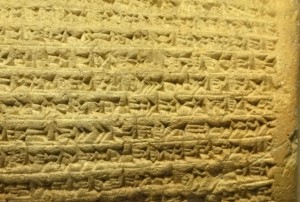 women, rights for all subjects, and is considered the first ever ‘bill of human rights’. Cyrus let the Israelites, amongst others, return to their home lands and he gets a mention in the Bible for his benevolence. Meanwhile the book of Esther, one of only two bible chapters titled by women’s names, is the only chapter which does not explicitly mention god. Read by Christians as well as Jews, this Old Testament text tells the tale of an orphaned Jewish woman who lived in ancient Persia under king Xerxes (or Ahasuerus) in the Persian city of Susa, which she then became queen of after a beauty pageant. Being Queen, Esther was able to avoid a genocide of her people by influencing the king, although there a great deal of

bloodshed is described on each side still. The book’s beginnings tell of how the previous Queen Vashti would not come when beckoned, as the King had wanted to show off her beauty to his court guests, he became angry and took actions that would ‘restore the power of men in their own homes over women’. Vashti is banished for being independently minded, vain, willful when in fact at the time, it would have been common dancers that entertained the king’s guests, not a queen. In fact a queen would be protected from men’s gaze more than any other woman, which explains why Vashti refused.

This very day the Persian and Median women of the nobility who have heard about the queen’s conduct will respond to all the king’s nobles in the same way. There will be no end of disrespect and discord.

“Then when the king’s edict is proclaimed throughout all his vast realm, all the women will respect their husbands, from the least to the greatest.”

Is this an odd choice to a Jewish-Iranian combined peace project? Perhaps not. Many read the story as allegory for the relationship of church/synagogue and God as a marriage. At the end of the performance the clay and paper prints are given as gifts to members of the audience. There’s something very exciting about clay and ink, even if you can’t read the Hebrew or the Cuneiform, the meanings are inferred.

“Peace seems a fragile idea” say the artists, Linda Behar of Jewish heritage and Raheleh T. Filsoofi of Iranian heritage. Their intent is to bring communities together for conversation and to send a message of tolerance and acceptance throughout the world through their prints, and through they very act of collaborating together as artists, as ‘ambassadors’ for their countries of origin.

Born in Venezuela and established in the United States since 2000, Linda Behar is an artist who originally trained as a Civil Engineer. She attended the “Academia Taller Arte y Fuego” in Caracas in the 90s and became a specialist in glass casting and Pate de Verre (Glass paste).

Behar has actively participated in biennales in Venezuela and she received 1st place at the “Premio CONAC” (the CONAC Award) in 2002 under the category of glass. Her work has been exhibited in the Habatat Galleries, ArtSpace Virginia Miller Galleries, Turchin Center of Visual Arts and Arte Puy in Venezuela.

She is currently studying a Master of Fine Arts degree with an emphasis in Printmaking at the Florida Atlantic University.

Raheleh T. Filsoofi researches clay by women in Iran which is supported by a Chastain-Johnston Middle East Grant from the FAU Peace Studies program. Filsoofi received her MFA in ceramics from Florida Atlantic University in 2014. She moved to United States from Iran in 2003 and worked with several renowned American Ceramic artists on public art projects in Coral Springs and Miami. Raheleh’s work is steeped in the sense of cultural memory and displacement with regard to her native country and the way in which people construct identity through sight and sound. She field researches documents on the state of traditional and contemporary ceramic art in Iran today and in particular the role that women play in them and has participated in juried art exhibitions in Iran and the United States, including The National Council on Education for the Ceramic Arts in Tampa, Florida (2011), Continuum Exhibition, The Cultural Council of Palm Beach, Lake Worth, FL.2012 and, “Confluence” Exhibition, , Boca Raton, FL 2014.
She has received several awards including a Presidential Fellowship.