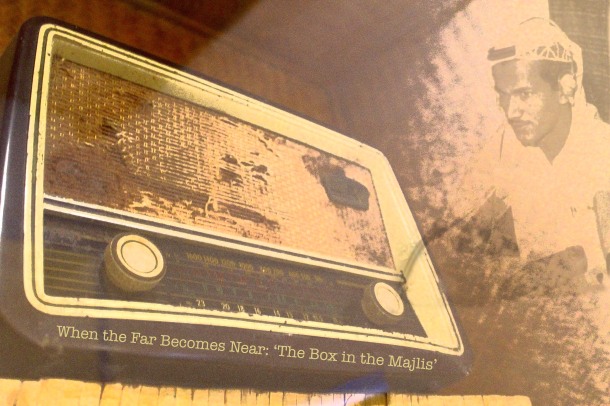 ‘The Box in the Majilis’

Episode 2 of the monthly series When The Far Becomes Near:

The programme takes the form of an imaginary audio tour for the blind and partially sighted, guiding museum visitors around a room in the exhibition, ‘The Box in the Majilis’. The exhibition contains objects that illustrate the changing role of radio broadcasting and reception in the United Arab Emirates between 1950-1990s.

In the UAE, listening took place at first only in the home and in cafes. At home the reception room is called the majlis, which translates literally as ‘place to sit’, and a house’s majlis was a place of learning and collective gathering, it is still a cornerstone of Emirati culture.  As much as majlis can refer to a place of social gathering and informal learning, it can denote a formal legislative assembly. ‘The Box in the Majlis’ progresses on to more portable radio sets and to car radios, which marked the beginning of commercial broadcasting and the proliferation of stations in the early 1970s.

When the Far Becomes the Near is a four-part, monthly series which archives the history of radio broadcasting in the United Arab Emirates. They are positioned by sound artists Fari Bradley and Chris Weaver as radiophonic experiments punctuated by oral histories from local historians, from academics, cultural commentators and the federation’s earliest broadcasters.

Commissioned by Sharjah Art Foundation, the archive describes a Gulf at the turn of the 20th Century tuned, via radio, to a world outside. Sources are early memories following on from Emirati traditions of oral history, with both the original voices and with some translated from Arabic.

The title for the series, and for episode 1, come from an interview with Salem Obaid who was once a junior broadcaster at Ajman’s first homegrown radio station, the earliest locally run station in the Emirates. Salem Obaid refers to a reported hadith, predicting a future “When the near becomes far, and the iron speaks.”

Episode 1: an audio missive from archives far in the future.

Listen on air in London on: 104.4FM or on DAB digital radio signals in London.