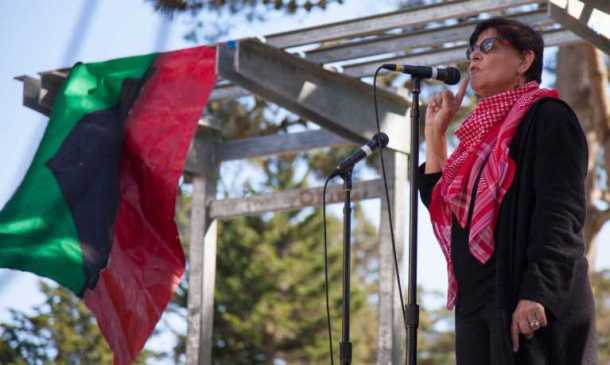 Dr Rabab Abdulhadi of San Francisco State University (SFSU), speaks frankly on the 100th anniversary of the Balfour Treaty, at University of London’s School of Oriental and African Studies.

While the UK Prime Minister prepared a state visit by Netanyahu, and publicly announced she was proud of the foundation of Israel, many others in the UK remembered the role of Britain in founding the nation. The declaration was contained in a letter written in the 2nd November 1917 from the United Kingdom’s Foreign Secretary Arthur Balfour, to Lord Rothschild, a leader of the British Jewish community, for transmission to the Zionist Federation of Great Britain and Ireland. The text (below) of the declaration was published in the national press on 9th November 1917.

Professor Rabab Abdulhadi, Director and Senior Scholar of the Arab and Muslim Ethnicities and Diasporas Studies and Associate Professor of Ethnic Studies/Race and Resistance Studies at San Francisco State University, will discuss the dialectics of 100 years of colonialism and resistance in Palestine. In the process she will historicise the contradictions of class, gender and nation, problematise feminist frameworks and Palestine gender and sexuality studies and propose a conceptual framework for a Palestinian strategy of liberation.

Dr Rabab Abdulhadi is the Director and Senior Scholar in the Arab and Muslim Ethnicities and Diasporas and Associate Professor of Ethnic Studies/Race and Resistance Studies at the historic College of Ethnic Studies, San Francisco State University. Before joining SFSU, she served as the first director of the Center for Arab American Studies at the University of Michigan, Dearborn. She is a Policy Advisor for Al-Shabaka, the Palestinian independent think tank, and serves on the International Advisory Board of World Congress of Middle East Studies where she chairs its International Committee.

Also in Brighton on digital signal and again online, from midnight-00:30am the following Friday morning on Resonance Extra.