Banksy Graffiti on the Apartheid Wall


Incensed by the provocation of the USA to move it’s Israeli embassy to the disputed area of Jerusalem, the orchestrated, cold blooded killings of civilians marking the 70th anniversary of their exodus (nakba) from their homeland, and motivated by the music project stemming from Banksy’s Walled Off Hotel on the ugly side of the West Bank Wall, we’ve programmed an episode dedicated to music made in Palestine.

Below is the test about Project9 the collaborations that brought Brian Eno together with the Trio Joubran and features recordings from the hospiice roof in Jerusalem. Other artists featured range from oud composers in Palestine to DAM, the hip hop band and Straight Outta Palestine.
https://www.mixcloud.com/widget/iframe/?hide_cover=1&light=1&feed=%2FResonance%2Fsix-pillars-13th-june-2018%2F 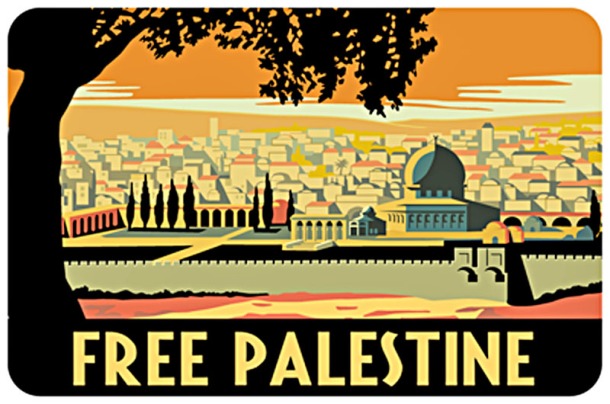 The original Visit Palestine poster was designed in 1936 by Franz Krausz to attract Jews to the land, the poster wound up becoming a symbol of Palestinian nationalism.

“Conceived after an extended period helping Banksy produce The Walled Off Hotel art project in Bethlehem, London artists Block9 returned to the West Bank in February 2018 to host a “Creative Retreat at The Walled Off Hotel”, a musical creative ‘retreat’… with a difference.

The retreat aimed to stimulate creativity and cultural connections, taking inspiration from the geo-political landscape of Palestine, and took place at “The hotel with the worst view in the world”, which is in the shadow of the 25ft high concrete Israeli separation barrier.

A group of select international recording artists were invited to take part including musical icon Brian Eno, Beirut’s much heralded Mashrou Leila (who elected not to make their track free for download like the others), underground US DJ/Producer The Black Madonna, avant-garde singer/songwriter/producer Roisin Murphy, and  Palestinian musician Samir Joubran of the renowned oud playing Trio Joubran (who joined fresh from recording with Roger Waters of Pink Floyd).

Each artist was given a loose brief – to respond musically to their time spent in Palestine. All were given a month following the retreat to deliver. All have created incredible music.”

Live On Air, On Digital Radio Signal and Online.